3D-printed tortoise shells could help save this threatened species

Biologists are using 3D-printed, fake tortoises to learn more about raven attacks and discourage the predators from feasting on desert tortoises.

If you happen to be wandering the Mojave Desert and come across a desert tortoise, don’t poke around the critter too closely—you could end up covered with a surprise spray of artificial grape fluid. That’d be because that tortoise is a 3D-printed imposter, and it thinks you’re a raven.

Thanks to human activity, ravens have invaded the deserts of the western U.S., taking a toll on its ecosystems and threatening the desert tortoise in particular, preying on juveniles before their shells are fully formed. In an effort to save populations, a biologist has teamed up with engineers to forge a 3D-printed, lookalike baby tortoise that allows them to gather data on raven strikes—and to counter-attack with a non-toxic spray. He hopes the “techno tort” partnership could serve as a template other biologists could use to solve certain conservation crises.

Ravens are considered a native invasive species. They’ve proliferated by 700% in the past 25 years due to expanded human presence in the desert, providing opportunities that didn’t previously exist in the hostile environment: highway roadkill and trash are now food, while billboards and transmission towers are nesting structures. Tim Shields, a field biologist with more than 30 years’ experience studying tortoise behavior and populations, Zoomed into a call with Fast Company from his car outside Victorville, California, on the southwestern edge of the Mojave Desert. “I’m looking at a landscape that has been transformed,” he says. “I’m looking at nothing but opportunities for ravens.”

Ravens eat well. They feast on burrowing owls; the colorfully named Coachella Valley fringed-toed lizard; and on young tortoises, which ravens eat by poking their beaks through soft shells as the tortoises surface to escape scorching ground temperatures. They have little choice but to emerge: In the spring, juvenile tortoises must go out and eat to help ossify their keratin shells, since the bone will make them more immune to predation in the long run. But by doing this for 8 to 15 years of their early lives, they then risk raven attacks. Desert tortoise populations have reduced by at least 90% since the 1980s, and are officially listed as threatened—though Shields says they should be in the endangered category. 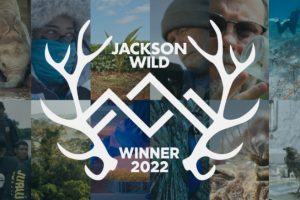 Eco-Hack! was just named the winner of the “Ecosystem—Short Form”[...] 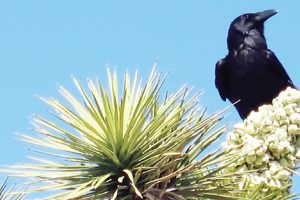 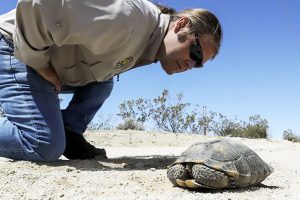